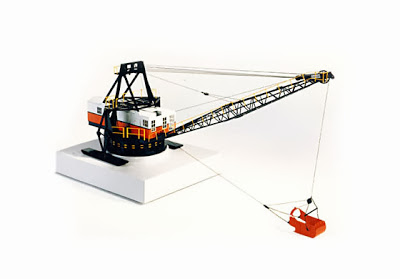 On May 13, 1939, the very first Marion walking dragline ever built was shipped to Placer Properties in Oakland, California. Although it was originally built as a prototype, that same Model 7200 was still operating at American Aggregate Corporation’s Indianapolis yard over fifty years later. In 1994 Classic Construction Models was honored to pay tribute to the legacy of that machine and the 7200s that followed it with a special limited edition of just 150 models.

Built to a precision 1:48 scale, our all brass model of the Marion 7200 Walking Dragline was carefully developed from original drawings supplied by Marion and a painstaking field survey of the actual machine. Each of the digging movements–hoist, drag, boom topping and swing–are fully functional, along with walking shoes that move in the same “up and over” motion as those on the real machine.

We delivered the model to our customers fully assembled and rigged with a perfectly scaled version of the 6-cubic yard bucket and 100’ boom that were on the original machine. This would be our only model of a walking dragline until 2009, when we made a replica of the largest ever built, the Big Muskie.

The adjustable boom had a length of 25” and the body a length of 9.5” making this an impressive looking piece on a shelf or desk.  The width of the model at the outside of the shoes was 8.5” and the body was 9” tall. It weighed just over 9 pounds. These models sold originally by reservation only for $1795 each, and occasionally can be found in secondary markets today for a great deal more.

One thought on “Memorable Model: The Marion 7200 Walking Dragline”