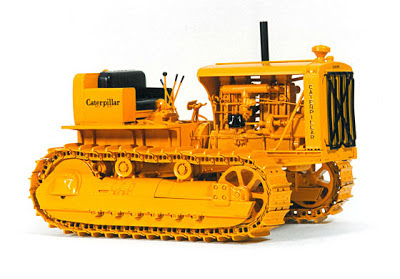 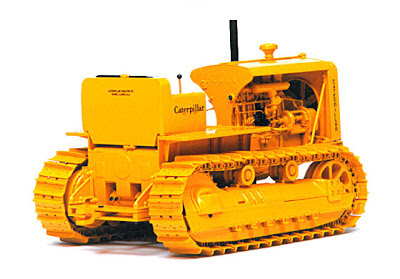 In 1934 Caterpillar began selling the Caterpillar Seventy track-type tractor, the largest and last of its gas-powered tractors which were soon to be replaced by the newer, more popular diesel machines.  In the years emerging from the Great Depression, many municipalities and private contractors used the Seventy in the construction of roads. It received heavy use in agricultural circles, as well, helping mechanize America’s farms on a larger scale than the Caterpillar Ten did four years earlier. The Seventy was also a favorite of the logging industry as it could safely and efficiently pull equipment and logs over rough terrain.

In 1996 we released the Caterpillar Seventy track-type tractor, our first 1:24 scale, brass Caterpillar model. As with all of our pieces, we spent countless hours familiarizing ourselves with the original machine to develop the model of the Caterpillar Seventy. By referencing a multitude of machine plans, photos and measurements of the real tractor, we designed the most precise model possible. The model has over 375 etched, cast or machined brass parts.  Details included individually-linked tracks, functional track tensioners, a full engine, accurate controls, and complete suspension. The final pieces were finished in a period livery of Caterpillar paint and markings. 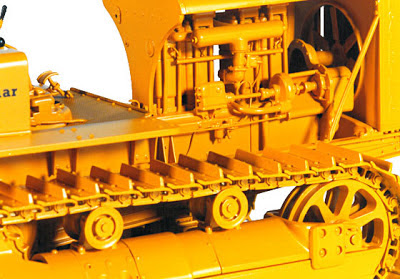 The model was approximately 7” in length, 4” wide, and 4.5” tall. It
weighed in at over 2.5 pounds of brass. Each was individually serial
numbered and came with a certificate of authenticity. The cost at the
time of release was $1295. Of particular note, was the size of the
single production run. Caterpillar only produced 266 of the actual
Seventy, so we responded in kind by only producing 266 collectable
models.