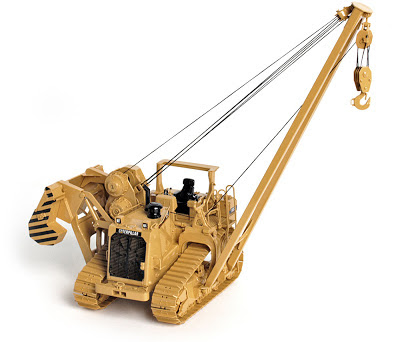 Although it seems like yesterday, it has been seven years since we rolled out the Cat 583T Pipelayer model. One of our more unique pieces due to the real machine’s application, it is immediately recognizable to enthusiasts of construction equipment, and one of our favorites.

At 1:48th scale in brass, the model weighs just over a pound and is approximately 8” wide from the counterweight to the end of the boom. Only 4.25” long from the front to the hitch, it most stands out because of the boom which is nearly 7” tall and displays a complex sheave block and hook with six parts of line, just as the real machine would have.

Other nice details include, individually linked and free-rolling tracks, operator’s seat with control panel and joysticks, counterweight and mast that can move into position for transport or operation.

Only 310 these models were ever made. 225 came in the standard open ROPS configuration, while 85 units included the cab. Retailing at the time for $795 and $875 respectively, they still hold their value today due to the limited production run.