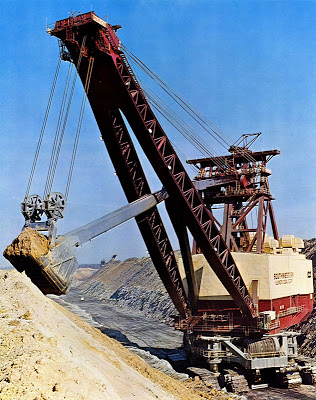 At the time of its creation in 1965 for the Southwestern Illinois Coal Corporation, the Marion 6360 was the world’s largest mobile land machine; with ballast it weighed 28 million pounds. It required 10 months for field erection at the Captain mine near Percy in Southern Illinois. Working around the clock, seven days a week, it helped deliver approximately 150 railroad carloads of coal a day. It moved overburden 270 tons at a pass, uncovering two coal seams simultaneously at the mine. 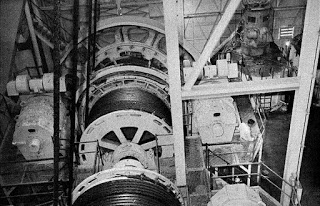 This interior view shows the two hoist drums that were driven by eight 1,000 hp electric motors, the largest ever used in an excavator. Four 3 1/2-inch wire ropes hoisted the dipper through a two part hitch. One of eight 625 hp swing motors is in the background.

Four motor generator sets converted 14,000 volt AC power to direct current for twenty main-drive motors capable of 30,000 horsepower output. The shovel could propel itself at 1/4 mph on four pairs of crawlers. Each crawler was 45 feet long and 16 feet high. Each crawler shoe measured ten feet across and tipped the scales at 3 1/2 tons.

The operator could telephone nine other stations on the machine, talk to the ground by loudspeaker, or to other mine areas by radio. A 3-man 8-story elevator transported crewmen from the lower frame to the machinery deck and gantry structure.

There was more than a mile of wire rope in the Marion 6360. The hefty dipper measured 24 feet from teeth to door, was 18 feet wide, 24 feet high, and could hold 180 cubic yards of earth and rock.

One thought on “Iron Profile: Marion 6360 Shovel “The Captain””