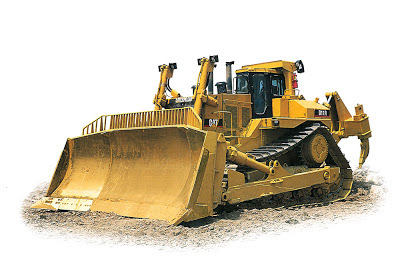 In March of 1996, Caterpillar introduced the D11R which was equipped with a 3508B EUI—turbocharged and aftercooled—increasing output from the 770 horsepower of the D11N model to 850 horsepower. The new machine also meet new EPA emission standards, but by and large the performance metrics were comparable to the D11N, which had dominated the size class with 70% of sales the decade prior.

The other improvements to Caterpillar’s largest track type bulldozer occurred primarily in the cab. An Electric Clutch Brake (ECB) steering system with Finger Tip Control (FTC) put into a single panel allowed the operator to control steering, machine direction, and gear selection all with the left hand. The blade and ripper controls remained on the right hand side of the cab. This increase in comfort and ease of operation improved performance, reduced human error, and shortened job time

There were also noteworthy improvements made to the brakes, including thicker plates and disks which provided higher torque capacity and increased service life. The oil cooling valve controls 75 gallons per minute, representing an almost 80% increase. These improvements were key, as it takes a lot to slow and stop a 108-ton piece of equipment. 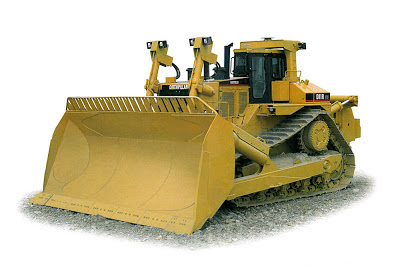 Several months after the release of the D11R, Caterpillar unveiled the D11R CD (Carrydozer). The CD featured a taller, deeper curved blade that would allow pushing of more material over greater distances. The machine also had other improvements to help the increased load, such as a strengthened structure, rock guards and deflector shields to protect lift and tilt cylinders from spillover. The unique blade also enabled the tractor to operate on steeper slopes.