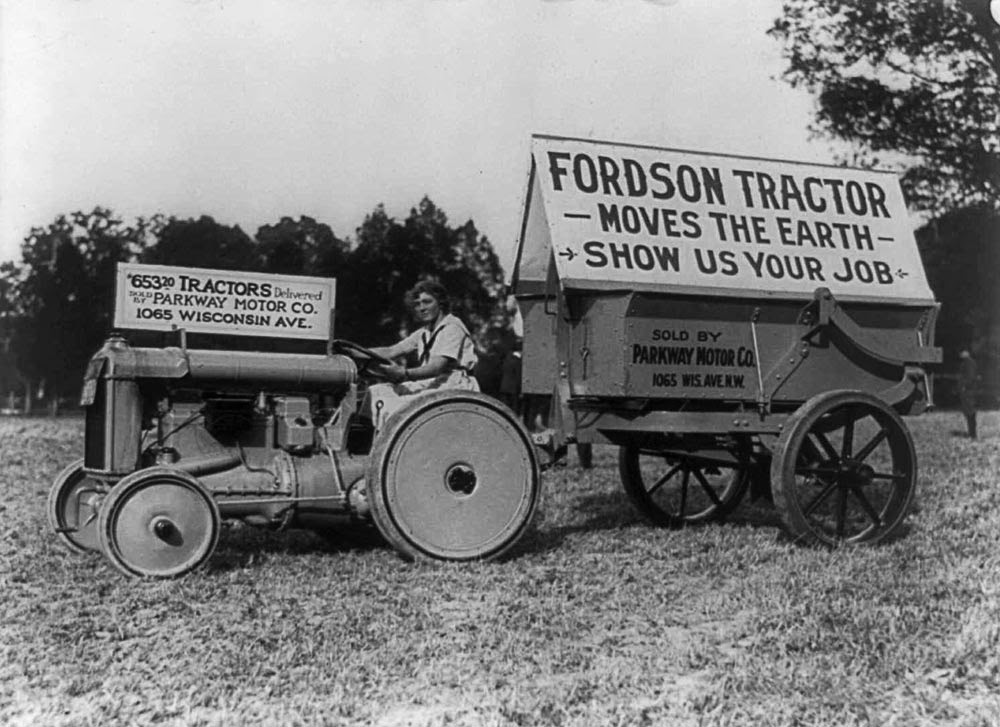 The immense popularity of Ford’s Model T automobile led to the creation of a diverse industry of aftermarket parts with which the car could be modified to meet practically any whim or application. When Henry Ford applied the same basic concept to the farm — offering a basic, dependable machine at a low price – the results were similar. The Fordson sold very well to farmers, most of whom had never before owned a tractor. The tractor won so many customers, in fact, that the little gray Fordson had a disastrous effect on a number of established equipment makers. But while some factories closed, others opened: a new industry grew up around the Fordson, as well.

Established engineers and backyard welders alike came forward to offer features and attachments that made the bare-bones Fordson tractor the picture of versatility. They created and sold anything from rear fenders (which the first Fordsons didn’t have) to heavy contraptions of angle iron, cables and gears that made the Fordson capable of digging basements, grading roads or hauling dirt.

Henry Ford, who became both celebrity and wealthy manufacturer, was the first of eight children. With the success of Ford Motor Co., many of Henry’s immediate and distant family members opened Ford dealerships. Younger brother William was hired in the employment office for the tractor company and in 1920 William Ford & Co. became the tractor distributor for Michigan and northern Ohio.

William Ford entered the construction equipment business in 1925 with the formation of the Wilford Shovel Co. in Detroit. The most obvious component of the tracked 1/4-yard Wilford shovel was a gray Fordson skid unit. In 1927 the company changed to Universal Power Shovel Co., with William Ford as president. In addition to the Fordson powerplant, the shovel used several parts from Ford cars and trucks: the crowd device on the shovel was a Ford truck worm gear. The machine could be purchased at Ford dealerships.

New owners
United States production of the Fordson tractor ended in 1928, the same year Universal found a new owner – Unit Corp. of America – and a new powerplant – often McCormick-Deering. The shovel began to look more like a purpose-built unit than a tractor conversion. It was a given a 1/2-yard bucket and some models were fitted with the large box-like cabs that were coming into vogue, while others were mounted on truck chassis.

Wilford’s new owner was founded in 1918. Unit produced forged steel components at its West Allis, WI, plant for railroad, agricultural, and other industries. The excavator line was transferred from Michigan to Unit’s drop forge plant and production continued. In the 1930s the shovel and forging businesses separated, and a group from Unit Drop Forge left to run the new company. It incorporated in 1934 as the Universal Power Shovel Corp.

Chief engineer and company president Harold Brey gave the marketing department an important exclusive when he developed a fully enclosed gear case in which the components operated in an oil bath to significantly reduce wear. The machines with Brey’s unitized gear case were the first to carry the Unit brand.

Ownership changed again in 1940, and the name of the company became Universal Unit Power Shovel Corp, simplified to Unit Crane & Shovel Corp. in 1956. During the World War II years, Universal produced cranes and excavators for the military as well as anti-aircraft gun mounts. Unit met the pent-up demand for equipment during peacetime with an offering of crawler and wheel-mounted cranes, excavators and material handling cranes. When the company celebrated its 25th birthday, it was specializing in 5 to 30 ton cranes and 3/8 to 3/4 yard excavators.

Full Vision cabs
The company developed a revolutionary cab during World War II. Introduced as the Full Vision cab, the new Unit cranes abandoned the large square housings used to protect machinery and man. The Full Vision cab was a central feature on all subsequent models, including the versatile Unit 357 mobile crane. Unit 357 was a wheeled machine capable of 1,001 uses, the company advertised, including operating as a shovel, dragline or crane.

Unit went off-shore in the 1950s with the introduction of the popular Unit Mariner crane for oil and gas platforms, and in the 1960s built a number of specialized material handlers, including models used for placing Titan missiles in underground silos.

The factory moved to New Berlin, WI in 1967, and the last excavator was built in 1982. Its production of the Mariner line and stationary cranes used in scrap handling continued, however. In 1988 this business was purchased by Offshore Crane Co. of New Orleans.

Marketed as Unit Forgings, mobile off-highway work accounts for 50% of its business, which is still done in the original factory on 62nd Street in West Allis, WI.