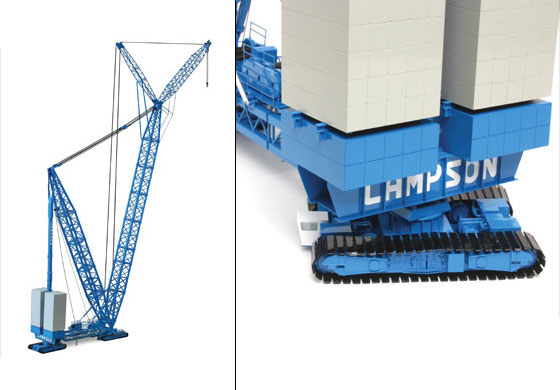 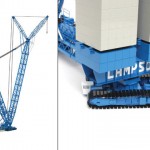 The model also replicates the 10 independent power units that are required to propel the crane and operate its hoists. Three detailed operator cabs (one for each crawler assembly and one for the winch drums) are accurately shown.

The overall length from the rear of the counterweights to directly below the tip of the jib is 52 inches. From that point to the ground is just under five feet. The boom measures over 44 inches and the jib alone is 22 inches long.

Lampson International owns and maintains one of the largest fleets of conventional construction cranes worldwide. In addition, Lampson designed and built Transi-Lifts and Transi-Carriers are at work around the world.

The largest capacity Transi-Lift currently manufactured by Lampson International, the LTL-2600 boasts a fully mobile lift rating of 2,600 US tons and can be equipped with over 400’ of pin together boom and over 200’ of Lampson 1,000 ton jib. Lampson’s fleet currently contains two of these machines with a third currently being manufactured.

The two original machines were constructed to assist ESSO Australia in the construction of a concrete offshore drill platform at Port Kembla. During the course of this work, one of the lifts was hailed as a world record for two land-based mobile cranes, with a successful lift of a platform weighing 1,570 tons that was set atop the structure at an astonishing 183 foot radius and a height of over 216 feet. 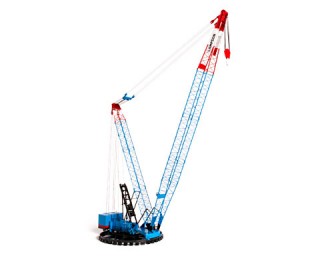