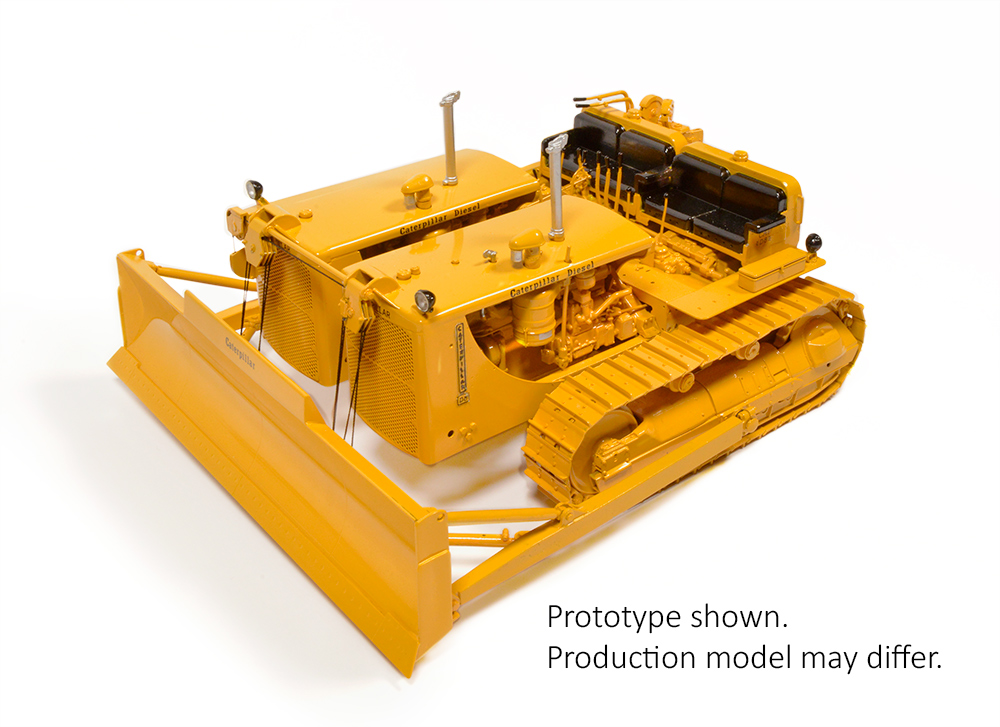 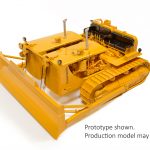 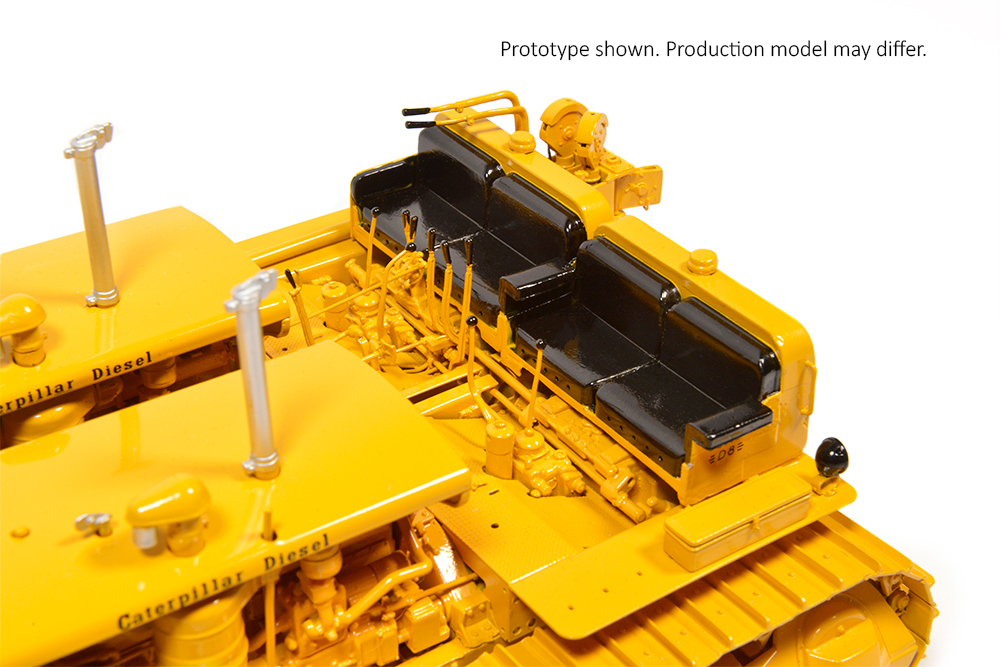 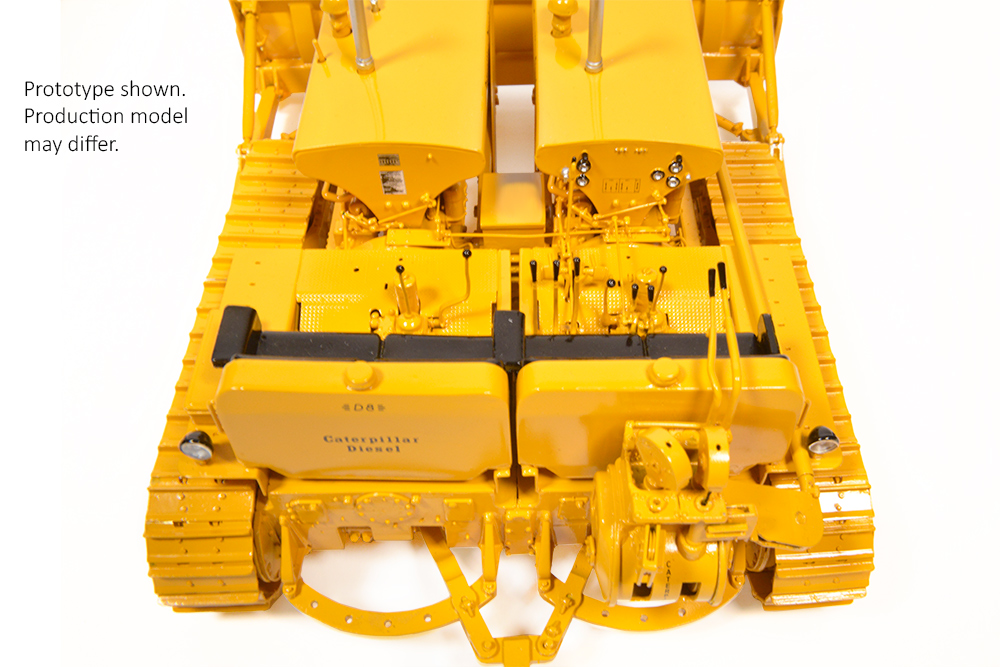 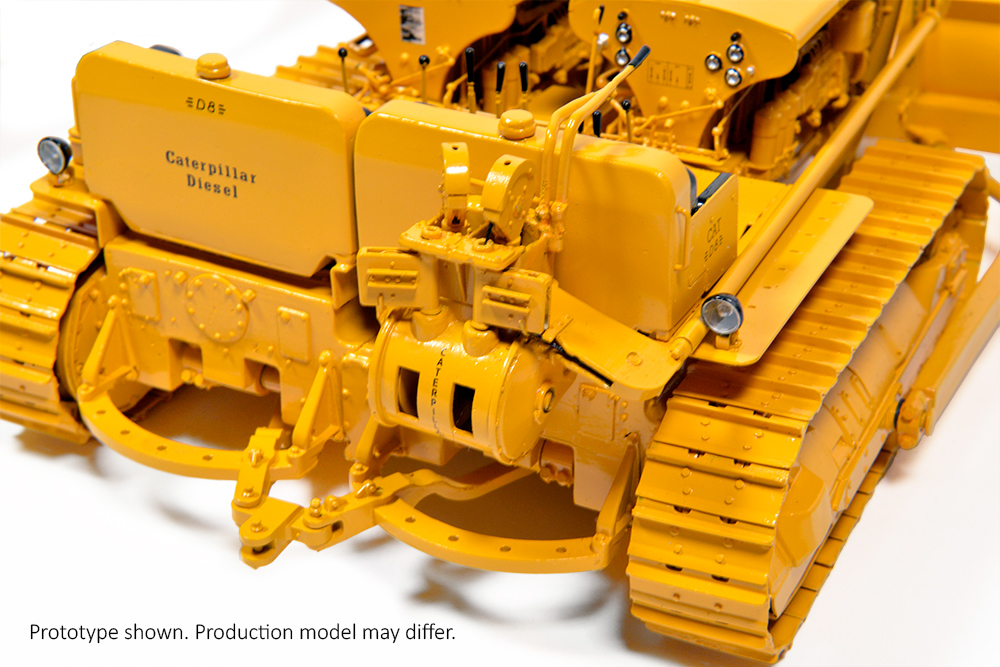 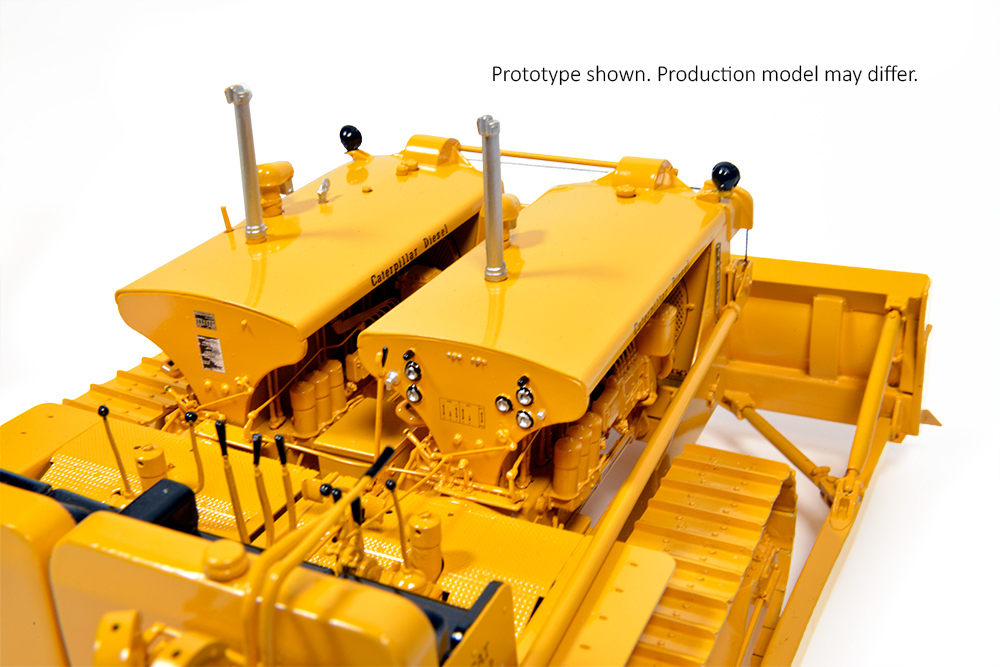 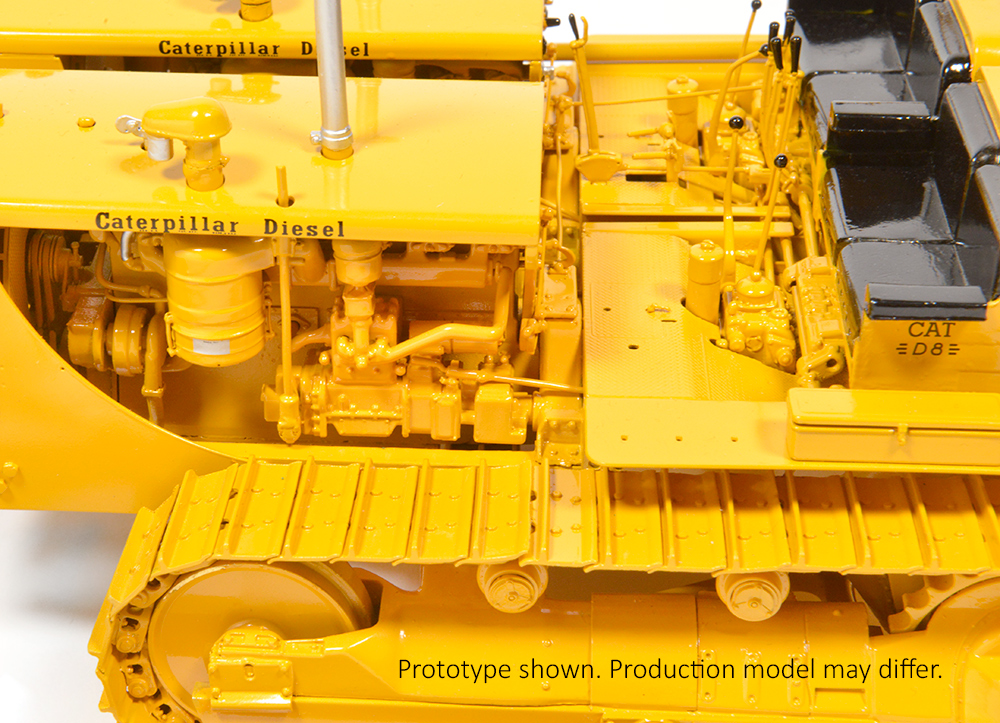 Introducing the newest model to join the CCM collection of brass replicas, the D8 Twin in 1:24 scale.  Standing at approximately 9″ long x 8.2″ wide x 3.6″ tall, the level of detail achieved on this model is second to none and is sure to be a focal point in even the most impressive of collections.

In the sense that a truly great model can be studied for hours and newly discovered details continue to impress, this model lives up to that expectation.  Areas of exceptional detailing include the operator’s stations, complete with foot pedals and control levers for both tractors as well as an accurately depicted instrumentation panel.  An open engine bay will reveal even more details to the observant as minute as fuel injectors, oil and fuel lines and pulley belts which adds to the realistic appearance.

Attached to the front of this machine and controlled by a cable-driven system on each tractor is an 8.2″ wide blade. The undercarriage of the model consists of individually linked, free-rolling tracks wrapped around drive sprockets and idlers with functional track tensioners.

Special attention was also paid to the custom plates and frame pieces which were engineered to connect these tractors, as well as an accurately replicated control system which allowed for operation of this machine by a single operator on the right tractor.

Each one of these incredible models is hand-crafted from hundreds of perfectly reproduced parts, painted in period correct colors with markings and warning labels providing the finishing details – all of which has been approved by the manufacturer for accuracy.

Although we are too early in the process to determine pricing we know that the production run will be low and availability limited. We will keep you up to date on progress and photos of these incredible models as we know more!

In 1948, the options for an extra-large dozer were few and far between.  With the D9 still 6 years away from its first working prototype, the ingenuity of Buster Peterson (Peterson Tractor) helped to span this gap.  He first built a proof-of-concept machine out of two Allis-Chalmers HD19’s that did well enough in testing to merit production from Caterpillar D8’s.

Starting with two D8 dozers, the largest available from Caterpillar at the time, placed side by side, with the interior crawler and final drive assembly of each tractor having been removed, a unique hard bar and custom plates were fabricated to allow the bolting of two tractors together using the inside final drive housings.  A control system consisting of two throttles, two gear-shift levers, two steering clutch levers and one master clutch lever was implemented to allow operation by a single operator.

Between 1949-1952, Peterson purpose-built three D8 Twin machines.  The first was sold to Morrison-Knudsen in 1950 and was put to work at the Farmington Dam just outside Stockton, California.  The other two Twins built by Peterson were high-clearance versions sold to Holt Tractor.  The first of these two was delivered to King Ranch in 1951 and fitted with a Holt Root Plow and Funnel Dozer to uproot 40-foot mesquite trees and stumps.  The machine worked so well for them that they ordered a second a year later, which was delivered in early 1952.

Several other D8 Twins were produced from a kit engineered by Peterson and sent to the dealer closest to the jobsite for assembly:

A final variation of the Cat D8 Twin was recreated by Peterson Cat for the company’s 80th anniversary.  With a little luck you can catch it on display at one of the Peterson Cat dealerships.

The introduction of the D9 in 1955 placed the cost advantage back to single tractor operations, ending the need for the D8 Twin. 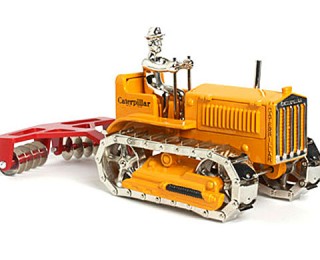 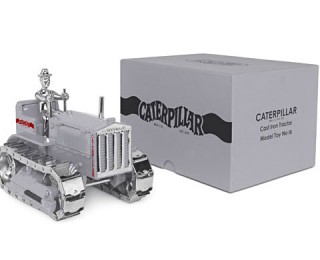